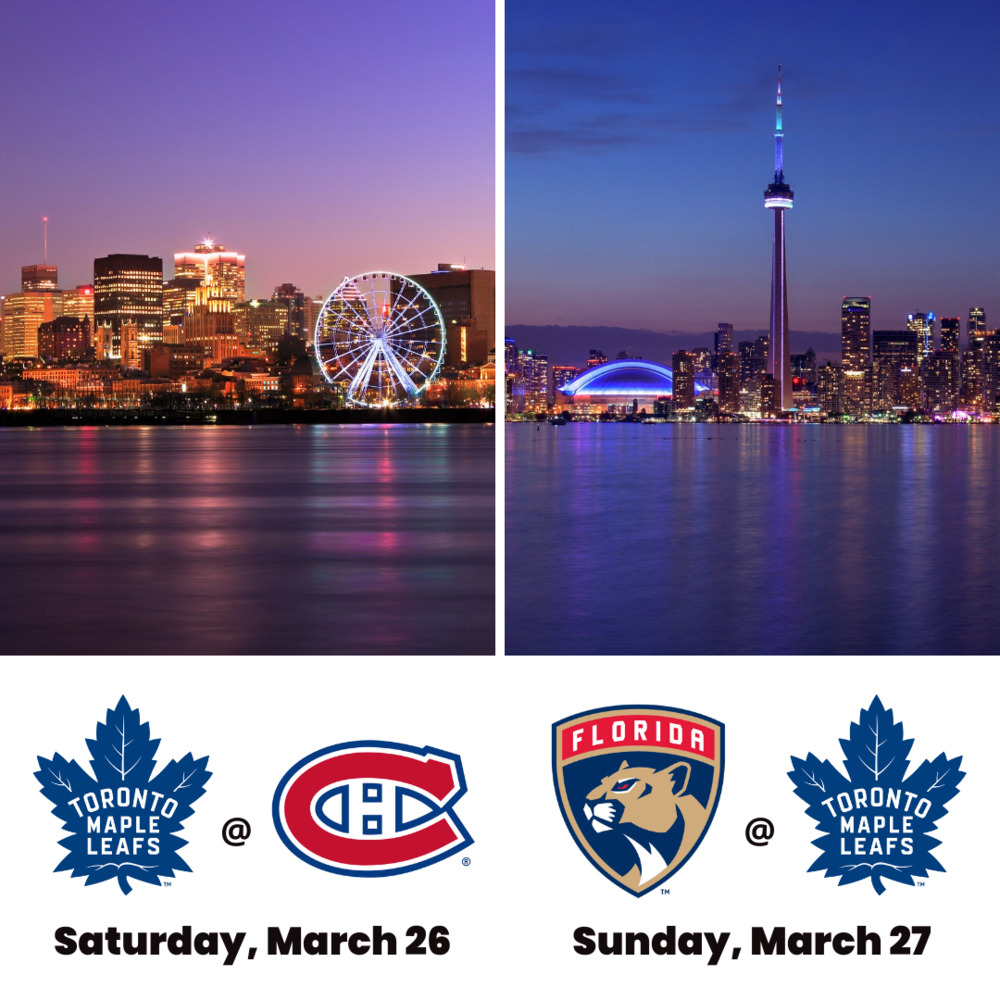 This VIP experience begins in Montreal, Quebec on Saturday, March 26th, 2022 where you and your guest will check into the luxurious Le Germain Hotel Montreal before witnessing one of hockey's greatest rivalries - Toronto Maple Leafs vs. Montreal Canadiens at the Bell Centre.

The following morning, you'll board a VIA Rail train to travel in first class to Toronto's Union Station. Upon arrival, you'll check in to Le Germain Hotel Maple Leaf Square, just steps from Union Station, Scotiabank Arena and the Hockey Hall of Fame.

A private tour of the Hockey Hall of Fame awaits you before enjoying an exquisite two course meal overlooking the majestic Esso Great Hall with a view of the Stanley Cup, NHL Trophies and Honoured Members Wall.

Following your dinner, you'll head over to Scotiabank Arena to catch your VIP double-header - Florida Panthers vs. Toronto Maple Leafs.

All of this planned for you by a certified Hockey Hall of Fame travel specialist!


The itinerary for this VIP experience for two (2) guests is as follows:

7:00 PM: Toronto Maple Leafs vs Montreal Canadiens at the Bell Centre. Tickets are in Section 116, Row FF - that's 6 rows from the ice!

8:50 AM: Depart from Montreal's Central Station aboard VIA Rail Business Plus. Sit back and enjoy your first class trip to Toronto with complimentary meals and refreshments.

4:00 PM: Arrive at the Hockey Hall of Fame for a private tour.

5:00 PM: Dinner is served overlooking the majestic Esso Great Hall with a view of the Stanley   Cup, NHL Trophies and Honoured Members Wall.

7:00 PM: Florida Panthers vs Toronto Maple Leafs at Scotiabank Arena. Tickets are in Section 105A, Row 11.

The trip can originate from Toronto or Montreal and includes round-trip VIA Rail Business Plus travel between the two destinations.

Hockey Hall of Fame does not accept liability for any cancellations which may occur as a result of strike and/or any consequential damages of any kind.

Covid-19 protocols for all package elements at the time of fulfilment will be in effect.

**This product will be processed and shipped at the conclusion of the auction. Deliveries are not guaranteed by the holidays. Holiday cardholder for this item is available upon request.